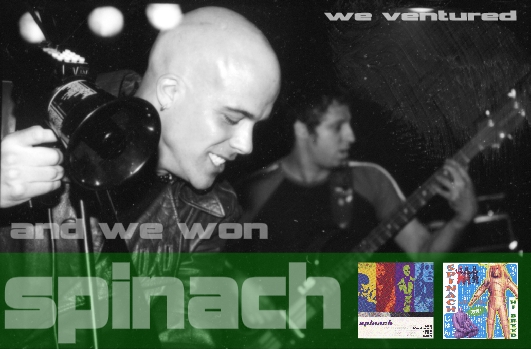 As the popularity of Spinach was growing the world-famous “Whisky a GoGo” offered us residency for hosting a Weekly Rendez-Vous with the top local groups called “The Neighborhood”.

At the time Spinach was a breath of fresh air on the L.A scene. Coming out with a very different approach than the regular power trio or four-piece band that had become normality. Layers of electronic music, sequencing and sampling techniques, the addition of a DJ’ Turntablist and various guest musicians added character, soundscapes and colourful arrangements to the sound of Spinach giving it an immediate edge and popularity. The musical climate rapidly changed as many bands jumped on the bandwagon and introduced similar fashion. The audience was very responsive to the new “Techrock” sound! 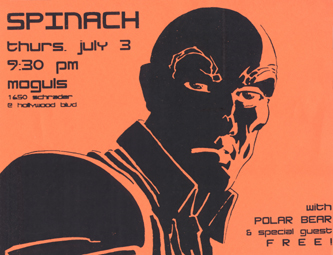 SPINACH AT THE MOGULS '98

A "key" club in the current Hollywood scene

Spinach was then under a management deal and released a CD single on “Stone lizard record”. Regularly played on KROQ at Zeke’s (backyard) show, on KXLU and a few other college radios promoting our shows and tour dates In San Fransisco Seattle and New York… 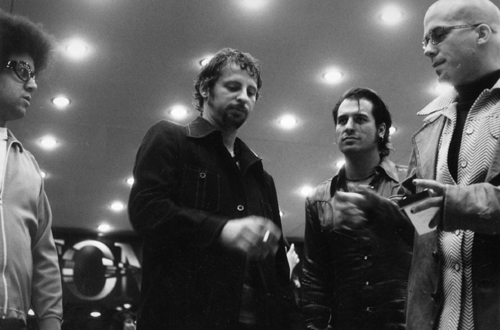 In 1999 An English Label www.shiftydisco.com released our single which was played All over England’s Radio stations and clubs and generated great reviews. 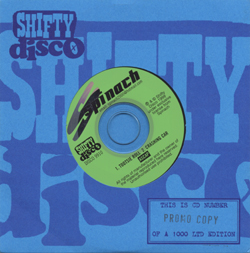 Ascap took an interest in Spinach and Invited our band to play under their name at the “C.M.J” (Music marathon/Music fest & Film Fest in New York) 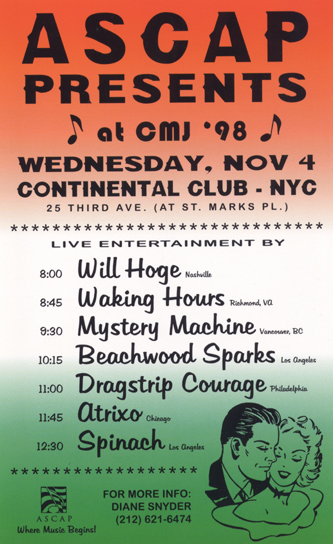 After Playing a minimum of two shows a month over a period of 7 years Spinach broke up in 2001.

All Song Written and Produced by Spinach